With the number of older drivers on the roadways expected to explode in coming years, the question of when is the right time for a senior driver to hand over the keys to the car permanently because of diminished abilities becomes a more pressing matter. By 2030, nearly 90% of the 70 million Americans older than age 65 are projected to have driver’s licenses (according to auto insurer AAA). That’s significantly increased from 2009 when just 33 million licensed American drivers were over the age of 65. 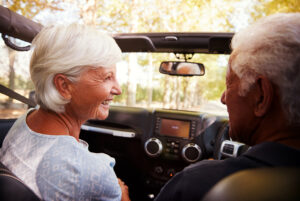 Many seniors fear the loss of independence that can come with the inability to continue to drive safely. To their credit, it’s a legitimate concern.

But a new study published in the Australian Journal of Age and Ageing has some good news for the senior population struggling to remain independent and self-sufficient. It appears that having cataract surgery can give seniors more (safe!) time behind the wheel.

Cataracts, a clouding of the lens of the eye, are the leading cause of blindness in the U.S. And according to the National Institutes of Health, about half of all Americans will either have cataracts or have had cataract surgery by the time they reach their 80th birthday.

Many people may avoid or delay cataract surgery because they have started to adapt to their reduced vision. This may work somewhat for interacting with people or a few basic tasks. But the cloudy, dull vision cataracts cause is not safe for driving – especially at night when glares and haloes can be more of an issue.

If people are on the fence about having cataract surgery, this study offers some solid findings regarding the very real reduced risk of accidents behind the wheel for senior drivers. Studies like this one should help people with cataracts feel even more confident about cataract surgery.

“Not only can cataract surgery give people the opportunity for restored vision, but it can also contribute to a safer, healthier life.”
– Jonathan Frantz, cataract surgeon and founder of Frantz EyeCare